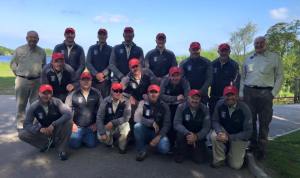 Congratulations to all AT TEFF team members for a convincing victory. 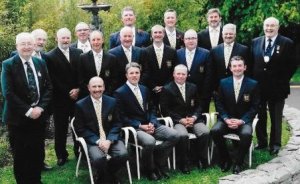 In practice the conditions had varied from light winds to strong breezes, but match day saw the teams take to the water in bright sunshine with very little wind. The bulk of the fleet headed for Victoria Bay or Gaureen Bay, both of which had been found to hold good numbers of “keepers”.

Lough Leane is a wild brown trout fishery with a large head of small fish. To count as a keeper the fish had to measure 10” from the nose to the fork of the tail. Fishing to local association rules, the first 4 fish of takable size were to be killed, with any over 10” after this released after being measured and agreed with boatman and their boat partner. Released fish were to count as 250g in the final weigh in.

The team fished sink or midge tipped lines with nymphs and hoppers. In calm hot conditions, a heavy buzzer was fished on the point to take the flies down to where the fish were. It was hard work, needing high levels of concentration to react to the fast taking, small brown trout. Many undersized fish were landed and returned, but the tally of takeable fish rose slowly during the day. Conditions improved in the last hour of the match, with the heavy, oppressive air lifting as a breeze filled in, and some who had been struggling all day managed to hook and land those elusive 10”+ fish.

At the weigh in, all fish taken were checked to make sure they reached a minimum of 10”. No-one wanted any penalties for weighing in an undersized fish. England went to the scales first and recorded 18 takeable trout, with the best bag being 3 from multi-capped John Horsey.

Ireland, on their home water weighed in 8 fish, with both Scotland and Wales recording 13 fish. When the weights were announced, England took the gold by a clear margin, with Wales piping Scotland for second place on weight of fish, and Ireland in 4th.

Best bag of the day and winner of the Brown Bowl was Alan Steven of Scotland who weighed in 4 fish, and heaviest fish went to Marco Orsi of Wales with a brown Trout of 430g.

Paul Angell, Autumn Loch-Style Team Manager stated “It had been a great team performance, based on the sharing of knowledge and ideas to develop a strategy that produced a Gold medal in difficult conditions. He also thanked the organisers for putting on a good competition in beautiful surroundings, and the boatmen who helped the team practice prior to the match.

Many thanks go to all the team sponsors, with a particular thank you to Wychwood for supplying the team with their new Hybrid Jacket, and to Angling Trust for all their help and support. Also to all team members who helped raise funds towards the cost of the week.”