Due to the current Covid-19 virus outbreak, the AT TEFF Executive have agreed the following courses of action:

As the 2020 Rivers Home International has been cancelled, the 2020 team will be rolled over to compete in 2021. The outcome of the delayed Qualifier and National programme (as per above) will form the Team to fish in 2022. 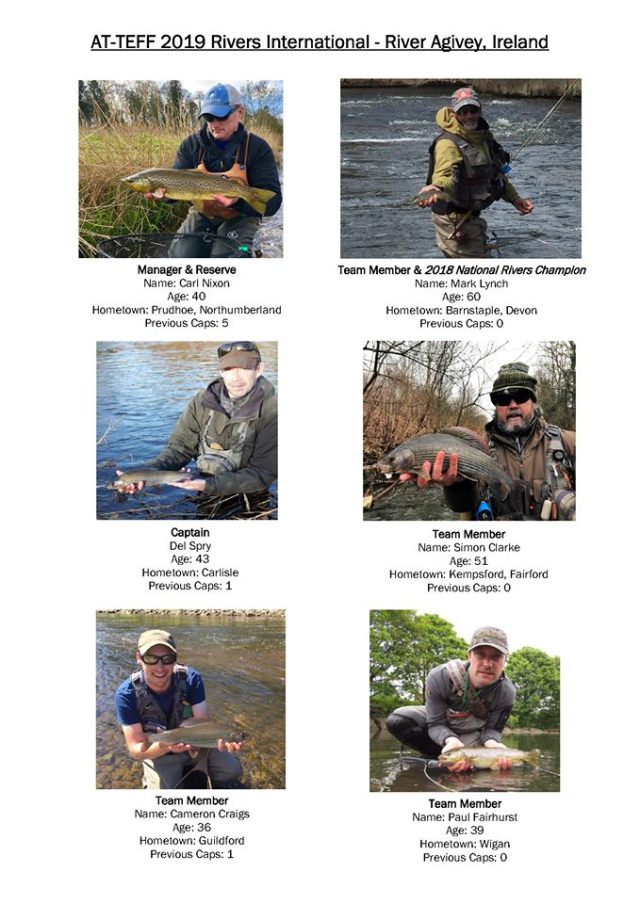 The Rivers International team flew and drove to Northern Ireland on Sunday to fish the River Agivey, in the IFFA Rivers Home International against Scotland, Wales & Ireland from 3rd – 6th July.

With a mix of overall international experience and fresh faces to the Rivers Team, the lads have put in hours of homework and time on the water – two team weekends which included an advance 3-day trip to Ireland to ensure the best possible start and outcome to their trip.

The host nation will be hard to beat on home water, but the team have given everything so far to ensure they can get the best possible result! Best of luck guys! 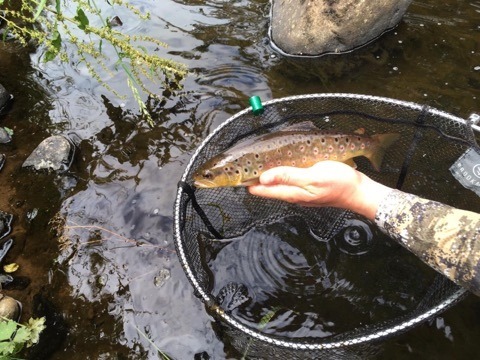 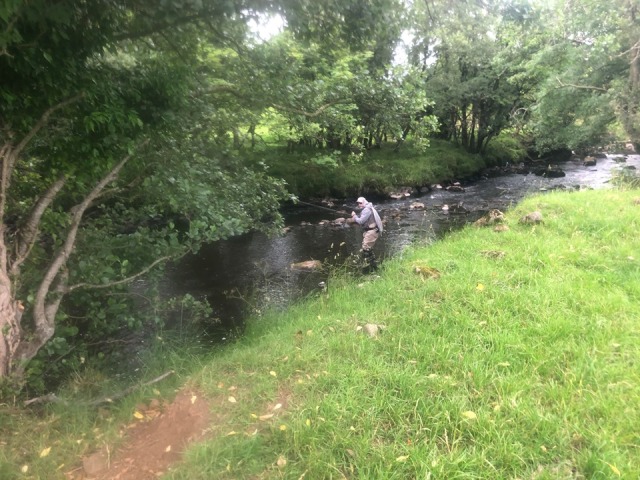 Congratulations to Ireland. With all five of their team in the top six, this was certainly a convincing victory by the home side.

AT Team England – Bronze Medallists in the 2019 River Home International 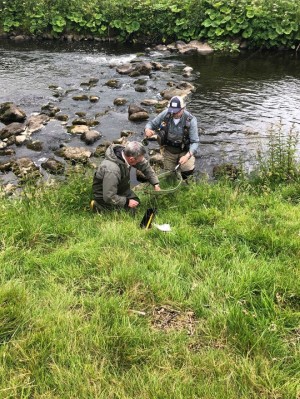 A trout about to be measured on match day 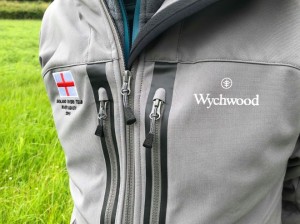 The Angling Trust reports: The ATTEFF Rivers Team consisting of Del Spry (Captain), Cameron Craigs, Mark Lynch, Simon Clarke, Paul Fairhurst and Carl Nixon (Manager/Reserve) headed out to the River Agivey in Ireland to compete in the recent Home International, 1st-5th July. England had several new caps in its team of six and beating the home team, and the experienced Welsh and Scottish teams, was always going to be a difficult task. Three of the team went out for a three-day trip in June to practice on the river and this proved valuable as the team prepared on the official practice days before the match.

As the week and practice progressed the team worked well to come up with working methods and to identify fish holding areas and access points. However, the big numbers and sizable fish soon made themselves scarce as match day approached. The team settled on a few successful methods, these being; the Duo, Double Nymph, a Single Plume Tip for the rising fish, and a larger Parker’s Dry in dead water slowly twitched back to get a response. The river conditions all week were ideal, however, agricultural machinery, capable of raising and dropping the level 2-4 inches in a matter of an hour or so, made the fish a little skittish at times.

On match day the Scottish and Welsh teams picked up blanks in the morning session and the Irish and English all caught. Things were close heading into the afternoon session. The afternoon sessions proved difficult and again the Scottish and Welsh teams picked up more blanks, unfortunately so too did the England team. The final scores saw Ireland win on home turf, with Scotland taking silver and England bronze.

Del Spry, Team Captain, said, “On the whole the week went very smoothly; the Irish did a fantastic job at organising everything. The team worked well together and worked hard on the water, both during practice and match day. We had an inexperienced team, but they were not lacking in effort and this showed in the results as we were only a few points behind a very experienced and disciplined Scottish team. This was a great England team and with more experience at this level I am sure we can improve on the results next year.”

Carl Nixon, Manager, said, “For an inexperienced team, we pushed a very experienced, circa 50 capped Scottish team hard for Silver. It was not the result we had hoped for but one we are all proud of considering the experience of the other teams. We would like to thank our sponsors Wychwood Game, Pure Fishing, Hunt’s Original and the Duke of Northumberland and Albury Estates for their support.”

Congratulations to Scotland to their victory on a day of bright conditions.

AT Team England FF was represented by:

Friday, June 22nd, probably the most difficult conditions this season in terms of conditions for fly fishing. England, Ireland, Scotland and Wales met on the River Ure to contest the IFFA River International on the magnificent Bolton Castle Estate in North Yorkshire. The harsh reality of the results suggests indeed that the conditions were hostile, despite the conditions each and every angler gave their all and it was Scotland who prevailed and took the gold medal.

Team England was ferociously captained by Fred Bainbridge whose boundless energy drove the entire team, which included three new caps, Gilliaum Vermeulen, Del Spry and Mark Harrison, such that even this comparatively inexperienced team was always going to be a threat. Fred’s intimate knowledge of the Ure, and tactical prowess was shared with the team from the day he was made captain and the team also benefited hugely from the experience of veteran dry fly master, Jonathan Barnes.

The draw for starting pegs did not aid England’s cause, but then a draw should never be an excuse. The standard at international level, on rivers, is now higher than it has ever been, and vastly experienced England manager, Jeremy Lucas commented “In my own observation I witnessed an exemplary performance, both in the build-up preparation and the international itself, of each team member. This includes the perception and experience of our seasoned reserve, Scott Nellins. It was heartening to see them go out there, with the entire range of methods and fly types at their disposal, with strength throughout a team – which was biased towards the inexperienced at this level – and then to see such a performance.”

The morning sessions were generally poor for England and the team found themselves in last place at the lunch time break. In such testing conditions avoiding the blank was incredibly important, but unfortunately for England, through no lack of effort, they recorded a couple. However, Jonathan Barnes secured two first placings in his morning sessions, while both Fred Bainbridge and Del Spry secured one second placing. Although with the afternoon to come, England were still confident they could recover and move up the table.

To a degree, England showed this as the team romped away to two firsts and two seconds in the third session, but the river had also ‘died’ by this time. Clear skies and bright sunshine meant conditions failed to improve, while a strong downstream wind developed making conditions even more challenging for all anglers on the water. The final session came down to avoiding the blank and England’s Mark Harrison took two fish, enough to win his section in very challenging conditions. Despite the team registering measurable fish it wasn’t enough to challenge the other nations for the title and Team England finished in third place as the event came to an end.

The ever popular and magnificent competitor Terry Bromwell, of Wales, to great applause, won the Moc Morgan trophy for the top individual, while his team fished hard they could only manage a fourth place. Ireland pushed the overall winners closely and had the consolation of the Mike Childs trophy for the day’s biggest fish (42.9cm), though it was Scotland who stole the day.

Jeremy went on to say “On such tiny things do international fly fishing championships hinge. Had Jonathan Barnes caught a fish in his last session, he would have won the day. Had the single fish caught by Fred, Gilliaum and Del been a little bigger, they too would have massively influenced the results. Finally, the best team on the day always wins, but Team England performed admirably, all the way back to the moment it was formed on last year’s National Final, and each member can hold his head high with pride. It was a great privilege to be with them throughout the campaign. Our congratulations go to Team Scotland on winning the event and to Terry Bromwell and Brian Russell on their individual achievements.”

Congratulations to Wales on a convincing victory.

AT Team England was represented by:

He also covered Team England’s practice for the event here>>

Congratulations to Scotland for a decisive victory.

Congratulations to Wales on a very close result.

It is a credit to the skills of all the anglers involved that the shrunken River Ure produced an average of just under ten fish per rod on what was one of the most closely fought Home Internationals of recent times, with small nymphs and dry fly the order of the day in the clear, low water. At the end of the four sessions it was too close to call, with England and Wales equal on placing points, so the the result went to ‘fish points’, i.e. the number and length of fish. England had more fish but Wales had some larger ones, and after counting these, England had 2686 points and Wales 2694, with Wales edging the win by the smaller of margins. Individual honour and the Moc Morgan Trophy went to England’s Andy Cliffe with a great performance on his England debut.

England Manager Mike Tinnion reports: “This turned out to be a nail-biting match (especially for a manager on the bank) fished in the very best of sport. The England team fished their hearts out to be pipped at the post by the tiniest of margins. Special thanks also to Lee Bartlett (reserve) for all his work throughout the competition.”

Our thanks to: Bolton Castle Estates for the superb stretch of river; George Hotel, Piercebridge, and Three Horseshoes, Wensley, for accommodation and match day food; the IFFA and the AT TEFF Northern Federation, especially Mr Paul Page, for organising the event; and last but not least, all the controllers/section judges for measuring the fish and ensuring they were safely returned.

Congratulations to Wales for a convincing victory.

Wales put in great performance to cope with a big change in river conditions on the day of the match.

This year’s home international was hosted by Ireland on the River Agivey, a tributary of the Bann. It proved to be the perfect venue for this type of event with lots of wild trout just about everywhere on all of the beats. With heavy showers rolling through all week, the river changed in height every day but still fished extremely well.

Friday, the day of the match, saw the river at probably its lowest level of the week. A tight competition ensued as it often the case. With fifteen minutes of an hour and a half session left on “A” beat in the afternoon, we saw all four anglers with the same number of fish, so one or two fish in the last ten minutes really can make all the difference between that 1st spot and a 4th place.

With Ireland claiming first place, just pipping Wales, this was a popular result on home waters. England also just beating Scotland for 3rd. Kieron Jenkins got a magnificent four 1st placings to take the individual winning place; to crown this he also took the Mike Childs Trophy home with him for the biggest fish.

Once again, this proved to be a fantastic event fished in the true spirit of fly fishing, and with all four nations winning this competition within the last five years, it will be anyone’s match next year when it moves to the mighty Tay in Scotland.