Posted on September 15, 2019 by teffpressofficer

Congratulations to Ireland on their victory.

The Angling Trust reports: The 2019 Autumn Loch-Style Home International took place at the Lake of Menteith between the 17th and 21st September. The England team spent four days prior to the match on the 20thSeptember practicing to find the most productive spots and to fine-tune their tactics. The fish were widely spread around the lake, with large concentrations evident in certain areas. The quality and size of the fish the team caught were first class and a credit to the fishery.

Steady winds from the south west coupled with dappled cloud cover meant that fishing dries and washing line tactics in the top foot of the water were most successful tactics during practice however, all options were trialled to make sure that the team built up as complete a picture of what to expect on the match day. 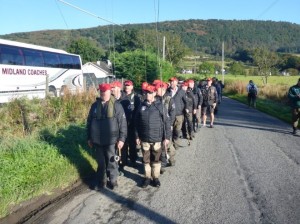 The march to the boat dock

Match day dawned to a different weather pattern with dense mist covering the lake which soon burnt off to bright sun and little or no wind. After the traditional march down to the lake by the teams accompanied by a piper, the anglers from the four teams set off at 10am. The boats split with some heading towards International Bay and Lochend, some to Otter Bay, others to Hotel Bay and the rest towards Gateside Bay.  It quickly became obvious that some areas that had previously produced good bags of fish were not going to perform as well in these difficult conditions. Dries were not an option for most and static washing line tactics on lines from Midge Tip’s down to Di3 were producing most fish, especially from the deeper water of Gateside Bay.

As the match progressed, a light breeze developed from the north east, allowing some movement of the drifting boats which improved the chances of anglers covering fish. Later on, during the last couple of hours, some anglers were even catching on dries, but this was never the dominant tactic it had been earlier in the week.

As the match finished, and the anglers returned to the lodge for the weigh in, it was obvious that despite the tough conditions, some anglers had recorded excellent bags. Unfortunately, from an England point of view, they were around a fish a man light off where they had hoped to be.

Paul Angell, England Autumn Loch-Style Manager said, “Despite our fourth place in the match I cannot fault the commitment and efforts of the team in practice or on match day. They worked together, shared ideas, and supported one-another well, ably led by their captain Mark Miles.”

The England team would like to thank Craghoppers for providing team clothing, and Fulling Mill, Guide Fly Fishing, Seapower and Snowbee for their continued support for the team.