Posted on July 1, 2019 by teffpressofficer

The European Fly Fishing Championship took place in Montenegro on 1st-7th July 2019 and was based at Plav. The Championship was held over 5 sessions fished on the Lim & Ljula Rivers, and Lake Plav.

The squad was led by Paul Page as Captain and Manager with Team Members; – Ben Bangham, Harry Fox, Simon Kidd, Bernie Maher, Terry Phillips, and Gilliaum Vermeulen as reserve. The European squad flew out to Montenegro a week before the Championship for practice and tactical development.

European Team Captain and Manager Paul Page stated: “Montenegro is a newcomer to Fips Mouche Fly Fishing Championships and this is the first time they have hosted a European Championship. This is uncharted territory for most competing nations and gives the England team a great opportunity to use their varied skill sets at a new venue and to be among the medal winners”

Fly fishing on the Lim River:

Terry Phillips won his session on Sector 1 Luca River – Gusinje with 20 fish, while on the Lim River – Plav Bernie Maher was 12th with 8 fish. Ben Bangham came 14th on the Lim River – Andrijevica, with Simon Kidd 15th on the Lim River – Berane. David Porter of Ireland won the boat session on Lake Plav with 3 fish, but half the field failed to catch, including Harry Fox. A point to note is that these championships were fished to a single fly rule, which would no doubt have affected the tactics applied. Spain took the lead with 22 pts, ahead of the Czech Republic with 27 pts and Poland with 32 pts. England were in 12th place (out of 20 teams). session-1-teams-after-session

Lake Plav continued to prove difficult with Terry Phillips one of the two thirds who failed to catch. Simon Kidd came 10th on the Luca River – Gusinje, with Harry Fox 11th on the Lim River – Plava, Bernie Maher 11th on the Lim River – Andrijevica, and Ben Bangham 12th on the Lim River – Berane. The Czech Republic moved into 1st place on 49 pts, with Spain 2nd on 57 pts. Individually, Jean-Guillaume Mathieu is currently leading with two 1st places, which helped France move into 3rd place on 60 pts. England moved up into 10th place, two places behind Ireland. session-2-teams-after-session session-2-indiv-after-session

Ireland scored another win on an increasingly tough Lake Plav, with Michael Drinan getting 3 fish. There was one other 3-fish bag, plus single fish to four others. Simon Kidd was one of the 14 others who were unable to avoid a blank. Harry Fox came 10th on the Lim River – Andrijevica, while Ben Bangham came 15th on the Luca River – Gusinje, with Terry Phillips 18th on the Lim River – Plav, and Bernie Maher 15th on the Lim River – Berane. Individually, Jean-Guillaume Mathieu (France) added a 2nd place to his two 1st places, to keep the lead with 4 pts ahead of Ander Perez (Spain) on 7 pts, and Lubos Roza (Czech Republic) on 8 pts session-3-indiv-after-session. The Czech Republic held onto their 1st place with 81 pts, while France moved into 2nd place on 89 pts, with Poland 3rd on 108 pts. A tough session for England saw them slip to 14th place session-3-teams-after-session.

The penultimate session saw some good performances from England, with Simon Kidd winning his session on the Lim River – Plav with 19 fish, and Ben Bangham one of only 10 people to avoid a blank on Lake Plav. This lake session also saw the current individual leader Jean-Guillaume Mathieu (France) reinforce his top spot with another win, putting him 9 pts clear with one session to go session-4-indiv-after-session. On the other sectors, Terry Phillips came 12th on the Lim River – Andrijevica, Harry Fox 15th= on the Lim River – Berane, and Bernie Maher 19th= on the Luca River – Gusinje. The top three team places saw some movement, with Slovenia up to 2nd place with 134 pts, behind the Czech Republic on 114 pts, with Poland 3rd with 138 pts. England slipped one place to 15th session-4-teams-after-session.

Lake Plav remained challenging, with half the field blanking, Bernie Maher among them. On the river sectors, Terry Phillips came 4th on the Lim – Berane, with Ben Bangham 10th on the Lim – Plav, Simon Kidd 12th on the Lim – Andrijevica, and Harry Fox 20th on the Luca – Gusinje. Individually, Jean-Guillaume Mathieu (France) rounded off an outstanding performance with yet another 1st place, to become the 2018 European Individual Champion with just 6 placing pts, (4 1sts and a 2nd), well clear of Michal Greszta (Poland) in 2nd with 16 pts, and Maciej Korzeniowski (Poland) in 3rd with 17 pts session-5-indiv-after-session. The Czech Republic held onto their lead to become the 2018 European Champions with 143 placing pts, with Slovenia 2nd on 159 pts, Bosnia-Herzegovina 3rd on 178 pts, Poland 4th 182 pts, and France 5th 184 pts. England finished the competition in 14th place, with Scotland 15th and Ireland 8th session-5-teams-after-session. 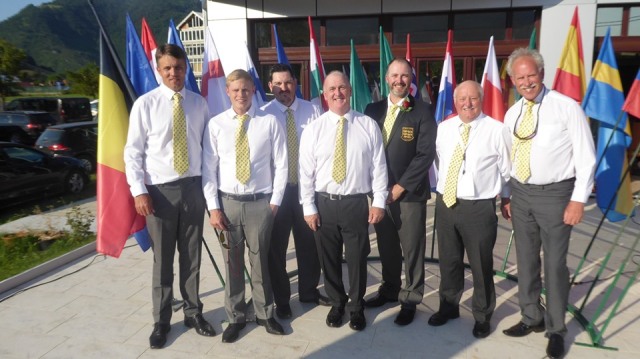