Posted on September 15, 2017 by teffpressofficer

Another win for AT Team England FF! Following gold at the Spring Loch-style International at Chew, Team England FF achieved another convincing victory at the Lake of Menteith. 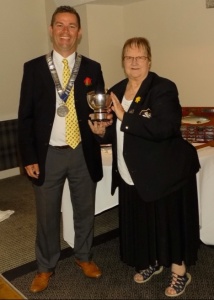 Congratulations to all AT TEFF members for another great performance.

Manager Stephen Peart reports: Following on from the convincing win for AT Team England at the Spring Loch Style International held at Chew Valley, the Autumn team were feeling the pressure to replicate a similar result in Scotland. The Autumn AT England team had a youthful appearance with five of the fourteen team members under the age of 30, adding a youthful vibrancy which was complemented with seasoned Internationals and three first-time caps.  Iain Barr had been appointed captain due to his previous experience, energetic personality and ability to lead anglers in a match that historically has a highly charged competitive edge.

Three days of variable weather conditions, ranging from moderate winds and sun to perfect balmy overcast conditions, meant that each day of practice provided very different challenges for anglers from the four home nations. The teams identified that a lot of fish were to be found in Gateside Bay around to Stable Point, and from Stable Point down to the Mallings.

During practice the England team quickly identified these areas fished differently depending on the conditions. When it was sunny and windy Di3 and Di5 lines fished with a four fly cast consisting of either two Fabs or Boobies with Diawl Bachs sandwiched between caught consistently. The Fabs were either Biscuit or Tequila in sizes 10 to 14, while the Boobies used were either a Cat Booby or a Candy Booby. The Diawl Bachs were quite flashy, with pearl and red holographic ribbed flies the main patterns, which were fished very slowly and hung deep.  When the winds dropped the England team fished the Snowbee 3ft Buzzer Tip line with the same combination of flies, fished washing line style.

Team England also identified the shallow water from Reedy Bay down to the Hotel Bay holding a large head of fish which responded well to floating line techniques. During practice Tony Fox and Andrew Taylor caught well on small Orange F Fly, Yellow Owl and Hare’s Ear Culs finding favour with the obliging trout.  Otter Bay also responded well to dry fly tactics but as this area tended to hold residential trout, the area only fished for the England team when the conditions were favourable and the trout rising freely. Tom Bird enjoyed some fantastic sport during the Wednesday practice taking ten rainbows in a hectic two hour spell on Black Midas dries.

Lochend was the final area that held a good head of fish and again this area responded well to both the Snowbee 3ft Buzzer Tip and Booby/Fab combination with Diawl Bachs, and Dries when the conditions allowed.

As match day dawned the weather was cloudy and overcast. As is traditional in an England Squad, Iain Barr delivered the daily captain’s team meeting and briefing on match tactics and individual expectations. The match tactic was to get as many English rods into the area from Mallings to Gateside Bay and effectively block off the area from the other competing nations. To do this we would require luck in the toss of the coin for captaincy and control of the boat. As I talked to all of the team members prior to the match start it was apparent that the coin toss had been kind and at least 8 English boats had won control of the boat for the first two hours.

At the off, half of the field headed towards Gateside Bay, with an even split of boats heading towards Lochend and Otter Bay, with a further 6 boats heading into Hotel Bay. The tactics that had worked well in practice were still working on match day. Tom Speak, fishing his first International Loch Style match, had two fish from Reedy Bay on Dries in the first ten minutes, which quickly settled any pre-match nerves. As the match wore on it was becoming obvious that the England team were catching consistently, with information being filtered around the team on who was fishing where and the best methods. The English team managed to execute their plan perfectively with eight boats spread from Mallings to Gateside Bay catching constantly, and with no other teams around to challenge, accumulated a match wining total.

Iain Barr had 17 fish for the match to claim the Brown Bowl. He concentrated his efforts from Mallings down to Gateside Bay for the entire match. He fished a Snowbee Buzzer Tip line for the first two hours with the Fab/Diawl Bach combination accounting for eight of his 17 trout. As the wind got up and the sun came out he changed between Di3 and Di5 lines with the same cast of flies to continue catching a superb bag of trout. Second placed angler in the match was England’s Martin Burgess who also had 17 trout for the match, narrowly missing out on the top individual spot. Martin also fished Gateside around to the Mallings using an Airflo 6ft Slow Tip with a Cat Booby/Diawl Bach combination. A brilliant catch by both anglers. England then blocked out the three top individual spots with Tony Fox landing 10 fish. He caught two from Otter Bay on his Orange F-Fly in the first hour of the match before also moving into Gateside Bay where he took another fish on his Orange F-Fly dry. A move to the Mallings drifting towards Dog Isle resulted in a further 5 fish in one drift on a Pink-arsed Fab /Cruncher combination.  The top three rods resulted in 44 trout towards the England final total of 101 and was the backbone of a fantastic team performance.

England weighed in first, and it was quickly obvious that they would be the team to beat, with all the team having fish to measure. Their total of 101 trout turned out to be a huge 36 trout ahead of second placed Wales. My favourite analogy from England vice-Captain Ed Foster was that we had won by 15 meters if you had laid out the 36 fish in a straight line and measured them!!! In a sprint finish that is a country mile. By the end of the weigh in, England had claimed 4 of the top 5 places with Iain Barr adding the largest fish trophy to go with his Brown Bowl. Phil Shaw Brown fishing his first senior International match finished in 5th place.

This was a real team effort, pre match knowledge sharing on flies and tactics, backed up by dedicated and well organised practice and record keeping. Communication on the water was the key element to our success, and each and every team member, from experienced captain Iain Barr to new caps Phil Shaw Browne, Tony Donnelly and Mark Tremain Coker, all contributing to a performance to be proud of.

AT Team England FF would like to thank our sponsors:

Craghoppers and Snowbee for their continued support with team clothing and Fulling Mill, Guide Flyfishing, Snowbee for tackle requirements and Costa for their help with sunglasses.

The Buchanan Arms Hotel for accommodating the teams and hosting the Gala dinner and prize giving.