Posted on September 13, 2016 by teffpressofficer

The 36th 2016 FIPS-Mouche World Fly Fishing Championship was held on the 10th-18th September in Vail, Colorado, USA, on the Eagle, Colorado and Blue Rivers and Sylvan Lake. 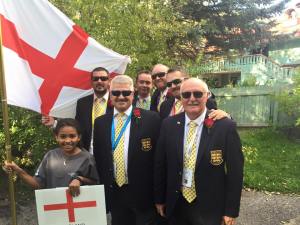 John Horsey also covered this event on his Facebook page here, as did FIPS-Mouche here.

Session 1: England scored two 13th places (Phil Dixon and John Horsey – on the lake), a 14th (Andrew Scott), and a 15th place (Howard Croston), finishing in 17th place out of 22 teams. France took an early lead, ahead of Slovakia, with Spain 3rd and the Czech Republic in 4th place. session-1-teamss

Session 2: A better performance saw England move up to 14th place, with a 5th place for Howard Croston and 6th places for Simon Robinson and John Horsey. Although Team USA moved into 2nd place, France extended their lead at 46 points to 68, with Spain and Slovakia both on 72 in 3rd and 4th place, and the Czechs 5th with 73.  session-2-teamss-cumm Individually, Jon Stagg of Australia was in the lead with 3 points, one ahead of France’s Sebastien Delcor and Pat Weiss of the USA.

Session 3: Despite another 6th place to Simon Robinson, England slipped  to 15th place in this session. Team USA continued to do well, closing the gap between them and the French (still in 1st place) to just one point, 85 to 86. Spain also had a good session, remaining at 3rd place with 93 points. session3-teams-cum With a 1st and two 3rds, Sebastien Delcor of France is currently in 1st place, one point ahead of Lance Egan (USA), with Julien Daguillanes (France) 3rd, and Pat Weiss (USA) 4th, both with 9 points. session3-indivs-cum

[Session 4 is a free session. The next competition session, Session 5, begins at 9.00am (local time) on Friday]

Session 5: Phil Dixon got a 4th in his section, and Howard Croston an 8th, but England ended this session in 16th place. Spain continued to improve, moving up to 1st place overall with 106 points, ahead of France with 120 and the USA with 123 points. session5-teams-cum A 2nd place moved Julien Daguillanes of France into the Individual lead with 11 points, one ahead of Lance Egan (USA) on 12, with Jordi Cortina (Spain) 3rd with 13 points. session5-indivs-cum

Session 6: Andrew Scott came 4th in his section in the final session, with Phil Dixon getting a 6th place and Simon Robinson a 7th on the lake, to see England finish the championship in 15th place. Spain extended their lead to end up the World Champions with 133 points, with France 2nd with 150 points, and the USA 3rd with 162 points. session6-teams-cum

The Angling Trust reports: The 36th World Fly Fishing Championships were held in Colorado, USA from 11th to 18th September 2016. Set in the stunning Rocky Mountains, the Eagle, Colorado and Blue Rivers provided the river sectors while alpine mountain lake of Sylvan State Park gave anglers the opportunity to fish Loch Style. 28 nations from around the world descended upon the Rocky’s with 133 individuals competed in the competition over 6 sessions.

Team England based themselves at Beaver Creek which had good access to the competition and practice venues. This gave England the opportunity to cover the majority practice and competitions venues however, there was no access  to Sylvan Lake but England were able to gain access to two other lakes nearby that contained wild brook trout and stocked rainbows.

England’s first session saw the team tackle the predominantly skinny water and small river beats, along with the gin clear water of Sylvan Lake. The team’s efforts produced less fish than that was expected from the practice days performances and England finished 16th by the end of the first session.

The second session saw a considerable improvement with Howard Croston finishing in fifth place while John Horsley and Simon Robinson ended up 6th in their respective sectors. Sylvan Lake continued to fox the team, however four of the other nations appeared to have identified the correct approach and England finished 8th in the session giving an overall place of 14th after two sessions.

The third session saw England head back to the river beats and the enigma of Sylvan Lakes.  Simon Robinson delivered a 6th place on the Eagle river. England ended the session in 14th place which saw them drop to 15th overall.

The fourth fishing session brought a new morning and renewed optimism that some good pegs would be drawn. Phil Dixon produced a 4th on the upper Eagle and the largest fish of the Championship 88cm Rainbow. The Lake continued to flummox the team and the other river sectors proved challenging. England ended the fourth session in 10th place and dropped further in the overall placings to overall to 16th.

The fifth and final session proved much the same for England but two bright spots gave were Andrew Scott’s 4th place along with Phil Dixon a 6th place during the session. The team’s efforts resulted in England finishing the session in 10th finishing and a final position of 14th overall.

Paul Page, Team England’s World Team Manager stated ”The team produced top 3 numbers of fish when practicing on the Blue, Colorado and Eagle rivers. With no boat fishing opportunities on gin clear Alpine Lakes Sylvan Lake was always going to be an open book to the team. The river beats, 24 per sector, varied tremendously in their fishing quality, mainly due to their shortness and low water levels. This unfortunately meant that the Championship was very peggy, however the top teams did perform well above average on the beats they were drawn”. Many thanks go out to all those who enter our regional qualifiers where a portion of their entry fee goes to support our International, European and World teams, along with our major fund raiser (John Ball) without who’s efforts Individual participation would be very expensive.”