Posted on October 28, 2014 by teffpressofficer

Ireland won the recent 2014 Bank International fished on Ross and Dunnydeer Lakes at Chatton Trout Fishery, Alnwick, Northumberland, just nine placing points ahead of England. A good start by Ireland in the morning session was followed by England narrowing the gap in the afternoon. Top individual and captor of the largest fish at 63cms was AT Team England FF’s Ryan Matthews.

The AT Team England FF Bank Team was:

Ireland held off a strong challenge from England to claim victory in the 5th Bank International. Ireland secured Team Gold. Top Individual and Longest fish, was Ryan Mathews from England. 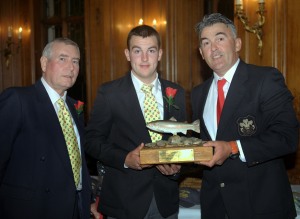 Teams had been practising since the weekend at the superb Chatton fishery. Using Dunnydeer and Ross Lakes the fishing was very consistent and challenging. 120 fish were caught in total on competition day, rod average 5 fish per rod.  Weather had been blustery during practice and the fishing challenging, until competition day and the wind dropped, temperatures rose and the teams targeted rising fish. After the morning session Ireland had a narrow lead over England with Scotland and Wales a little distance behind.  A consistent team effort saw Ireland maintain their lead to secure the ‘Founding Nations Cup’.

Chatton fishery proved to be excellent hosts with superb facilities complimenting the close competition, and my sincere thanks to Roger and his wife Ali.