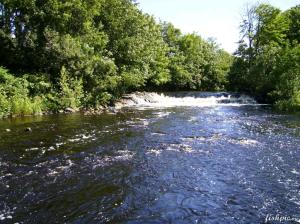 Ireland win the Rivers International which was fished on the River Agivey, Wales came second, England third and Scotland last.

This year’s home international was hosted by Ireland on the River Agivey, a tributary of the Bann. It proved to be the perfect venue for this type of event with lots of wild trout just about everywhere on all of the beats. With heavy showers rolling through all week, the river changed in height every day but still fished extremely well.

Friday, the day of the match, saw the river at probably its lowest level of the week. A tight competition ensued as it often the case. With fifteen minutes of an hour and a half session left on “A” beat in the afternoon, we saw all four anglers with the same number of fish, so one or two fish in the last ten minutes really can make all the difference between that 1st spot and a 4th place.

With Ireland claiming first place, just pipping Wales, this was a popular result on home waters. England also just beating Scotland for 3rd. Kieron Jenkins got a magnificent four 1st placings to take the individual winning place; to crown this he also took the Mike Childs Trophy home with him for the biggest fish.

Once again, this proved to be a fantastic event fished in the true spirit of fly fishing, and with all four nations winning this competition within the last five years, it will be anyone’s match next year when it moves to the mighty Tay in Scotland.

Chairman of Team England Fly Fishers
View all posts by clivecollier →
This entry was posted in Latest News, Uncategorized. Bookmark the permalink.